Tesla Motors is accelerating plans to complete its sprawling factory that it calls itsGigafactory, dedicated to building batteries for the company’s mass-market electric Model 3 sedan, CEO Elon Musk said in giving reporters a first look at the site Tuesday.

Production of smaller, cheaper lithium-ion battery cells will start later this year as opposed to 2017. Around 1,000 Gigafactory employees are working in shifts, some around the clock, to meet the new mandate. Eventually, 10,000 will work here.

This factory ramp-up will be critical to Tesla’s ambitious, ten-fold production bump to 500,000 vehicles a year by 2018. Hitting the target would make Tesla the world’s first mass-market electric automaker and help ensure its fiscal future.

Tesla officials said that by approaching the build-out as a scientific challenge, they have tripled the expected output of the completed factory from 500,000 to 1.5 million cars a year.

“The factory itself is a product. It’s the machine that builds the machines and demands more problem solving than the product it makes,” Musk told reporters after a tour of the 2-million-square-foot plant, which represents only 14% of the completed factory that occupies 3,200 acres just east of Reno. On Friday, select Tesla vehicle owners will get a similar tour.

“The factory has far more potential for innovation than the product itself,” said Musk. Asked if Gigafactory would take its place alongside Henry Ford’s assembly line innovation a century ago, Musk quipped, “Well, I just hope civilization is around in 100 years.” 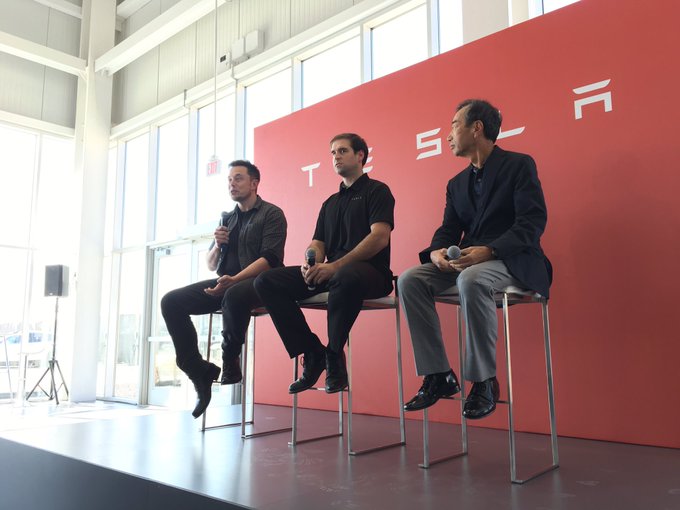 Pressure is mounting on Tesla to scale up as traditional automakers such as GM and Volkswagen become serious about long-range electric cars. Tech giants are showing interest as well. Besides Google, a leader in developing self-driving cars, Apple is rumoured to be making its own electric car. Also in the mix are stealth EV startups often led by former Tesla employees.

The two-year-old Gigafactory already is assembling Tesla’s Powerwall and Powerpack energy storage units, using cells provided by Panasonic. The Japanese electronics giant is a partner in Tesla’s $5 billion factory, which over time will benefit from more than $1 billion in state economic incentives.

Tesla’s Gigafactory, outside of Reno, will build batteries as well as cars. Work at the construction site is speeding up. (Photo: Marco della Cava, USA TODAY)

The facility is about a 30-minute drive east of Reno, or about four hours by car or rail to Tesla’s vehicle assembly plant in Fremont, Calif, south of San Francisco. Once complete, the factory will take up the space of 107 football fields, or five square miles. Tesla has acquired 3,200 acres total in the Nevada desert.

Musk has blogged that once Gigafactory is fully operational, which is expected in 2020, it will be able to produce as many lithium-ion batteries as were built globally in 2013.

Such a milestone would give a U.S. company a strong position in a market currently dominated by Asian companies that supply many U.S. and European automakers’ electric car programs.

What’s more, once Tesla can produce large quantities of batteries on site, further economies of scale could be achieved by building Model S electric cars, Model X electric crossovers and the Model 3s, expected to roll off production lines next year, on nearby Gigafactory production lines.

Over the years, the automaker has encountered delivery delays as well as manufacturing snags, most recently with the elegant yet technically complex “falcon doors” on the Model S SUV. Last quarter, it missed its projected delivery target of 17,000 vehicles by 3,000.

Tesla also has been rocked by the recent Autopilot death.

Federal regulators are investigating the Florida accident, in which the Tesla failed to brake when a truck suddenly cut across its path. Tesla says owners must always be prepared to take control of the vehicle even when its semi-autonomous systems are engaged.

Musk defended his company’s enthusiastic embrace of the technology. “We did the right thing (by rolling out Autopilot),” he said. “We improved people’s safety, not just fatalities but also injuries by reducing impact velocity. Unequivocally (the death) is a big thing. I’m more frustrated by the coverage.”

Despite persistent speed bumps, Tesla’s vehicles are considered state-of-the-electric-art products. But they’re also luxury items that often top $100,000 fully loaded. Much of Tesla’s lofty $33 billion valuation –half of behemoth VW’s – is in fact predicated on the company becoming a household name.

To that end, making a profitable, popular and quasi-proletarian electric car is seen as critical to Tesla’s financial success, and all eyes are on the forthcoming Model 3, which at $35,000 costs less than half of the Model S and X. It would offer consumers a 200-mile range, or closer to 300 if a more expensive battery option is purchased.

When the Model 3 went on pre-order last spring, Tesla was flooded with more than 400,000 $1,000 deposits. Buoyed by that $400 million infusion, Musk raised another $1.7 billion through a stock offering in late May to speed up the birth of the new car.

Musk is known for setting bold timetables and challenging targets for his companies, which include rocketry upstart SpaceX and, if his $2.8 billion bid is approved by shareholders, solar giant SolarCity, which is run by his cousin and in which he has a majority stake.

A model at the Gigafactory shows, outlined in black, the small portion that is currently under construction. Ultimately, it will take up the space of 107 football fields. (Photo: Marco della Cava, USA TODAY)

Ultimately, Gigafactory will be powered largely by solar panels, which could well be provided by SolarCity if that deal goes through. Musk is chairman of SolarCity, besides being CEO of Tesla and rocket firm SpaceX.

In a more definitive announcement, Musk signaled in a blog post last week titled “Master Plan: Part Deux” that his often outrageous dreams – which include a mission to Mars – continue to expand.

Tesla will be a virtuous clean-energy loop that mines solar energy to power homes and vehicles that will include not only sedans, pick-ups and small SUVs but also commercial trucks and buses, Musk wrote in the post. 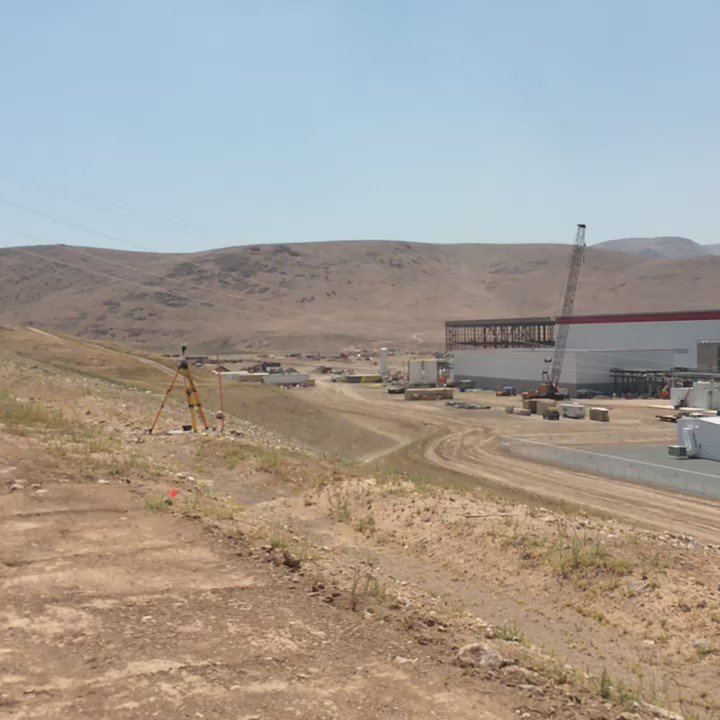 In the near term, he added, Tesla owners will be able to make money from their vehicles by rotating them into the sharing economy, while down the road fully autonomous Teslas will make city centers safer and less congested.

Arguably, all of those company threads lead back to Gigafactory, which aims to redefine modern manufacturing facilities. Led by veterans of Apple and Lego projects, the Tesla project is does not use an outside contractor. Roughly 70% of the union and non-union labor force comes from Nevada, and teams are rotated in and out as needed. Ultimately, Musk envisions a factory that can take in raw materials and push out a car at the other end, ideally on the order of millions per years.

Musk said he can envision Gigafactories in Europe, China and India, or “wherever there’s huge amount of demand for our end product.”

iPhone 8 can be the most successful iPhone ever, says Apple analyst

Google smart speaker to be cheaper than Amazon Echo

Gionee to set up manufacturing unit in India

admin - August 23, 2016
0
Handset maker Gionee will set up a manufacturing unit in northern India, pumping in about Rs 500 crore, to tap into the demand in...

LeEco India to hire over 1,100 engineers by next year

The two best smartwatches are an absolute steal

iPhone 8 can be the most successful iPhone ever, says Apple...

THE AVA BRACELET: A NEW WAY TO TRACK OVULATION

ABOUT US
We want to continue to pull the market in terms of innovations, high-quality tools and technology that are available. Therefore, Oddillio Labs help companies to do business better by leveraging our industry-wide experience, deep technology expertise, comprehensive portfolio of services and vertically aligned business model.
Contact us: hello@oddillio.com
FOLLOW US
© Oddillio Labs (P) Ltd
MORE STORIES